Radford Neal showed how to use annealing techniques to define importance samplers suitable for complex multimodal distributions. Sohl-Dickstein and Culpepper extended his work by demonstrating the utility of Hamiltonian dynamics for the transition kernels between the annealing distributions. We summarise these developments here.

A naive yet often practical way to estimate the expectation of a function $f(x)$ is simply to sample from the underlying distribution $p(x)$ and take an average:

However when $f(x)$ is close to zero outside some set $\mathcal{A}$ where $\mathbb{P}(X \in \mathcal{A})$ is small, samples from $p(X)$ typically fall outside of $\mathcal{A}$ and the variance of $\hat{\mu}$ is high. Estimating the marginal likelihood (or evidence) for a model given some data $\mathcal{D}$ is a canonical example of this. In this case $f(x) = p(\mathcal{D}|x)$ is the likelihood and $p(x)$ is the prior. For many models and data the posterior will be highly concentrated around a typical set, $\mathcal{A}$, that only has small support under the prior. That is $p(\mathcal{D}|x)$ will be small for most samples from $p(x)$ and a few terms in the average will dominate, resulting in a high variance estimator.

Importance sampling (IS) is a method that can be well-suited for estimating expectations for which the naive Monte Carlo estimator has high variance. The IS estimate of the expectation is

where $q$ is the importance distribution and $p$ is the nominal distribution. Choosing $q=p$ gives the naive Monte Carlo estimator. A well chosen $q$ will give $\mathbb{V}[\hat{\mu}_q] < \mathbb{V}[\hat{\mu}]$. A badly chosen $q$ can give $\hat{\mu}_q$ infinite variance. The ideal $q$ is proportional to $f(x)p(x)$. However in general this is not helpful as the required normalising constant is the intractable expectation we wish to estimate in the first place.

Finding good importance distributions when $X$ is high-dimensional and/or $p$ is multimodal can be difficult. This makes the variance of $\hat{\mu}_q$ difficult to control. Annealed importance sampling (AIS) is designed to alleviate this issue. AIS produces importance weighted samples from an unnormalised target distribution $p_0$ by annealing towards it from some proposal distribution $p_N$. For example,

Hamiltonian annealed importance sampling (HAIS) is a variant of AIS in which Hamiltonian dynamics are used to simulate the Markov transitions between the annealed distributions. An important feature is that the momentum term is partially preserved between transitions.

Unnormalised versions of well known densities are useful test cases for annealed importance samplers. If $p$ is such an unnormalised density function then its normalising constant is simply $\mathbb{E}_p[1]$ and can be estimated using AIS. This estimate can be compared against the exact value to double-check the validity of the estimate.

$X$ is said to be distributed as $\textrm{log-gamma}(\alpha, \beta)$ when $\log X \sim \Gamma(\alpha, \beta)$. The probability density function for a gamma distribution is

Running our HAIS sampler on this unnormalised density with $\alpha = 2$, $\beta = 3$ and a standard normal prior gives these samples 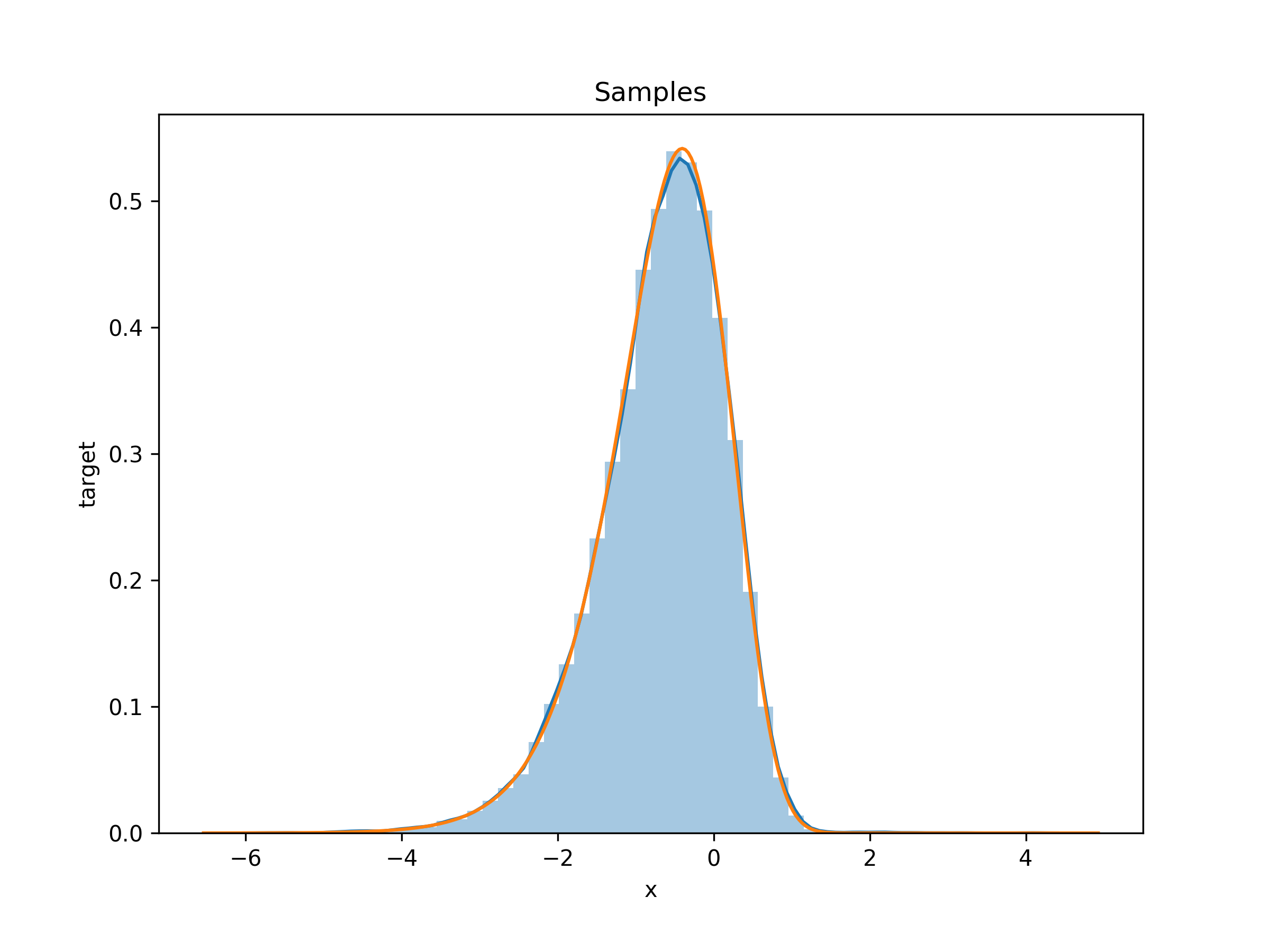 We used our HAIS implementation to estimate the marginal log likelihood for a latent variable model for which an analytic solution is known (model 1a from Sohl-Dickstein and Culpepper). In the plot below we compare our HAIS estimates with those estimated by the BayesFlow AIS sampler that is included with TensorFlow (version 1.6). 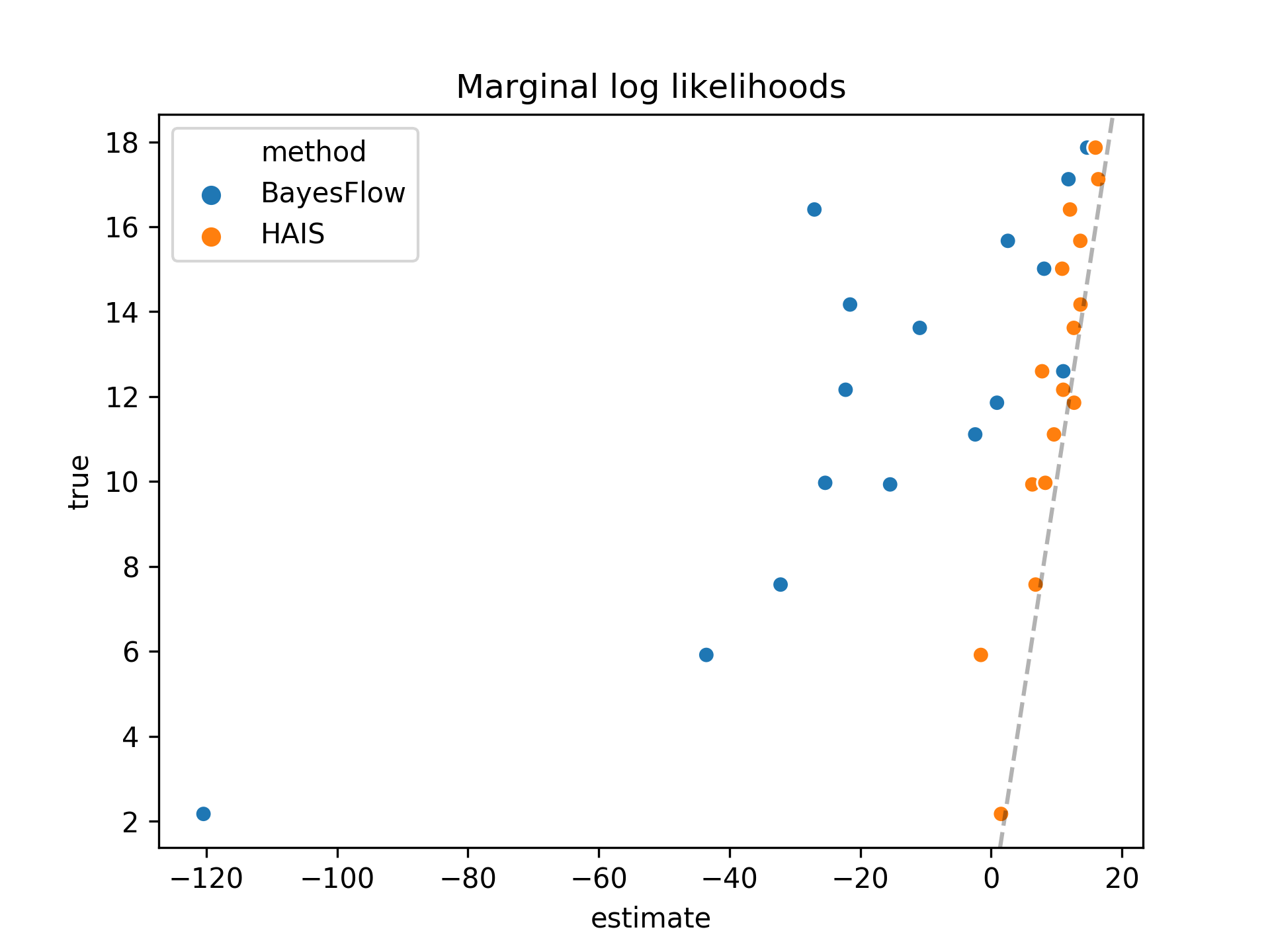 The dotted line represents the ideal marginal log likelihood estimates. We see our estimates are much closer to these true values.

Our implementation is available under a MIT license. Test scripts to generate the figures in this post are also available.

This is the story of *Fatboy*, a neural network that taught itself to playbackgammon back in the early 90s. When it connected to the [Fir...… Continue reading

Retrieving the k largest (or smallest) elements in R